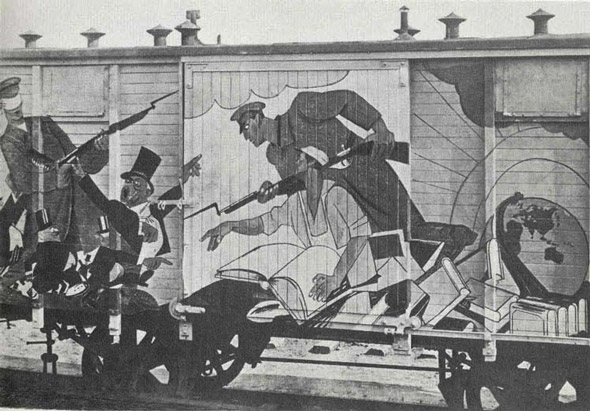 Unsurprisingly, it all began in the Brave New World café in Warsaw. The artist Anna Baumgart and the art historian Professor Andrzej Turowski, who specialises in Russian avant-garde, talked about the propaganda Moscow-Berlin train that in the 1920’s was supposed to ignite the revolutionary movements in Europe and support the revolution in Germany. The carriages were full of modern paintings and, most likely, also weaponry, which is something the painters had absolutely no idea about. Such artists as Malewicz, Kobro or Strzemiński hoped the revolutionary load of art would become the onset of the collection of the future Museum of Modern Art. The fate of the train and the Polish, German and Russian avant-garde artists involved is discussed in the common project by Turowski and Baumgart. He wrote a book under the title of Parowóz dziejów (The Locomotive of History), while she made a film entitled Zdobywcy słońca (Conquerors of the Sun). Sold as a pack, the book and the film perfectly complement one another. The book is a fast and interesting political, crime, artistic and detective story, which reads like a thriller. 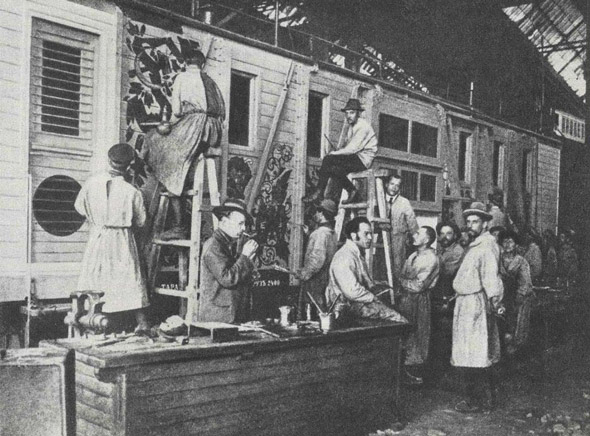 The route of the train called ‘The Locomotive of History’ was stretched in time, hindered by the changing historical and political circumstances. Eventually, the train arrived in Berlin, but it was sent back on its return journey. In 1927 it is known to have been halted on the side track in Koluszki, where it was most likely blown up, since all traces of the train disappear there.
‘In my novel entitled Parowóz historii’, writes Turowski, ‘the madly speeding train was the lost truth of the history to come, once drifting among the dream islands, modern utopias. The Museum of Modern Art is a physical realisation of the dream that the international avant-garde artists had to give art a social role. Seen from the past, the history of the museum of modern times levitates around the wreckage of the incinerated train, the ruins of modernistic myths. Shaped in the past, the history of the museum involved a constructive force enabling the creation of the brave new world. And the history of the future in the museum believes in its deconstructive power, the critical potential of the word. There is, however, a black whole emerging from my story, somewhere between the future and the past. It’s a kind of lacking and a loss that cause both histories to be quite melancholic while facing the inexistence of the founding source and the final destination. In fact, it is lack of reality entangled in the game of fact and fiction.’
Andrzej Turowski’s Parowóz dziejów and Anna Baumgart’s Zdobywcy słońca were both published by Instytut Wydawniczy Książka i Prasa as part of the series of the Le Monde diplomatique.

The ehxibition Zdobywcy słońca by Anna Baumgart opens in the CSW Kronika in Bytom on the 23th of March 2013.