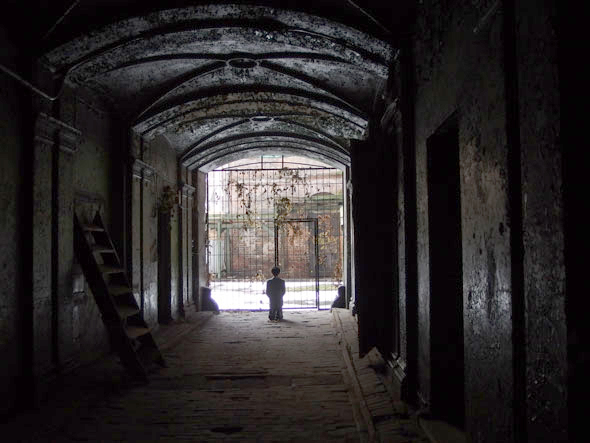 Cattelan returns to Poland. Unfortunately, his visit isn’t as spectacular as hoped by his fans, who whetted their appetite for a truly big event. The exhibition is definitely worth seeing, but, unfortunately, rather small with quite an unimpressive number of works. We realize, naturally, that it is quality not quantity that counts, but since we have a chance to see an exhibition of the world-famous artist who has just had his notorious retrospective at the Guggenheim Museum in New York, the limited number of his works is both surprising and disappointing. The halls of the Centre for Contemporary Art house five installations, plus the famous pigeons on the cornice (well remembered from the most recent Biennale) and a boy’s figure hanging on a pole in front of the main entrance. That’s it. The famous figure of Adolf Hitler praying called ‘Him’ (2001) has been placed in the gateway of the run-down tenement house at 14 Próżna Street. ‘Him’, which has stirred strong emotions whenever exhibited, is considered an icon of modern art. To have a really good look at it, however, use the exhibition poster, since the work itself has been well camouflaged in its location at Próżna Street, where we may only see its silhouette through a hole in the gateway door (what’s more, online rumour has it that the figure’s face and hands have been covered, and the original suit has been changed). And this is scandalous.